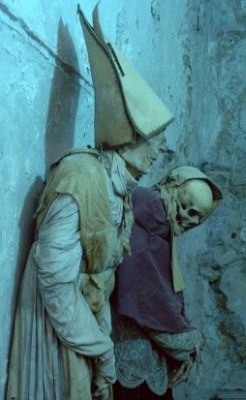 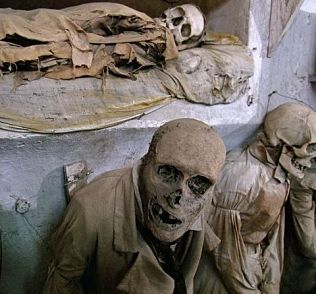 The Palermo Capuchin monastery is known worldwide for its unique catacombs that, unlike other similar sites have become a real attraction, so as to be introduced as a must- attractions for tourists since ancient times, and included in the European Grand Tour in vogue since the seventeenth century. 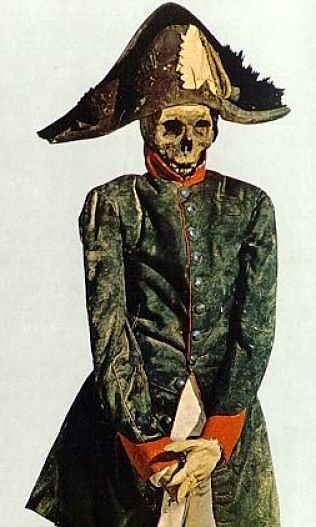 The characteristic of the Catacombs of Palermo is to expose the mummified bodies dating from several ages, about eight thousand bodies of men and women, hanging on the walls and are broken down by social class, sex or profession. The dead are recognizable by their clothing, other feature was in fact the choice to take care of their appearance and let them wear the clothes and uniforms used in life.

We may in fact recognize the prelates of each category, several Capuchin friars in the habits, the bourgeoisie and the nobility with their glitzy clothes, the soldiers in full uniform, the military and even young women in wedding dress.

The catacombs are thus a sort of photo album, a series of images showing the customs and costumes of various eras in the history of Palermo.

The most famous  ''element'' of the collection of the Catacombs of Palermo is Rosalia Lombardo, a girl died in 1920 when was two years old and mummified with a technique known only recently. The body of the girl lying in a glass case and it is incredible perfection of the face that makes her looking as sleeping.

The Capuchin Catacombs were inaugurated on 16 th October of 1599 with the mummified body of the Capuchin friar Silvestro from Gubbio who, after more than 400 years, is still there to welcome curious visitors.

The Catacombs of Palermo, can be a bit gruesome tour, but many visitors, skeptical at the beginning, however they are very fascinated by their uniqueness. The ultimate goal of this site is to let people reflect on the fragility of life and about the unimportance of worldly goods, which exist only to keep company to the mummies.

We prefer not to publish the photo of the little girl Rosalia Lombardo.

The visit of the Catacombs of Palermo is made throughout the year on request and is included in the tour Catacombs of the Capuchins, and Monreale.